Home Chefs are always looking for new ideas when cooking, a technique which not a great deal of people know about is cooking using a tagine.  Tagine cooking is so-called since earthenware containers named Tagines are normally made use of. These pots are usually around container covered by a large dome-shaped lid. This method of cooking is usually found in Moroccan Cooking. If you want to check out what different tagines look like you can check out a full range here.

The use of the Tagine is popular in Morocco because it requires a very small amount of water to cook with; when water was scarce tasty and hearty food could be cooked without using up precious water resources. Obviously the conservation of water is not such a priority in the West but this is not the Tagines only useful feature, it is a great way of slow cooking food as the ingredients inside are cooked for many hours. With its covered lid and unique shape, the earthenware pot helps to maintain moisture and juice inside. When oils and spices are added they infuse into the food to product mouth-watering meals very easily.

You can cook a wide variety of recipes with this uniquely designed cooking pot, traditionally the Moroccans would cook recipes like lamb or vegetable stews in the tagine. You can add dried fruits and nuts to the stew to give them a distinctive Mediterranean flavor. There are a number of great Moroccan recipe books available at Amazon such as Tagines & Couscous: Delicious Recipes for Moroccan One-pot Cooking. You don’t have to worry about not being able to obtain hard to find ingredients as they can also be purchased at Amazon check out Zamouri Spices who have all sorts of oils, spices and marinades available online. 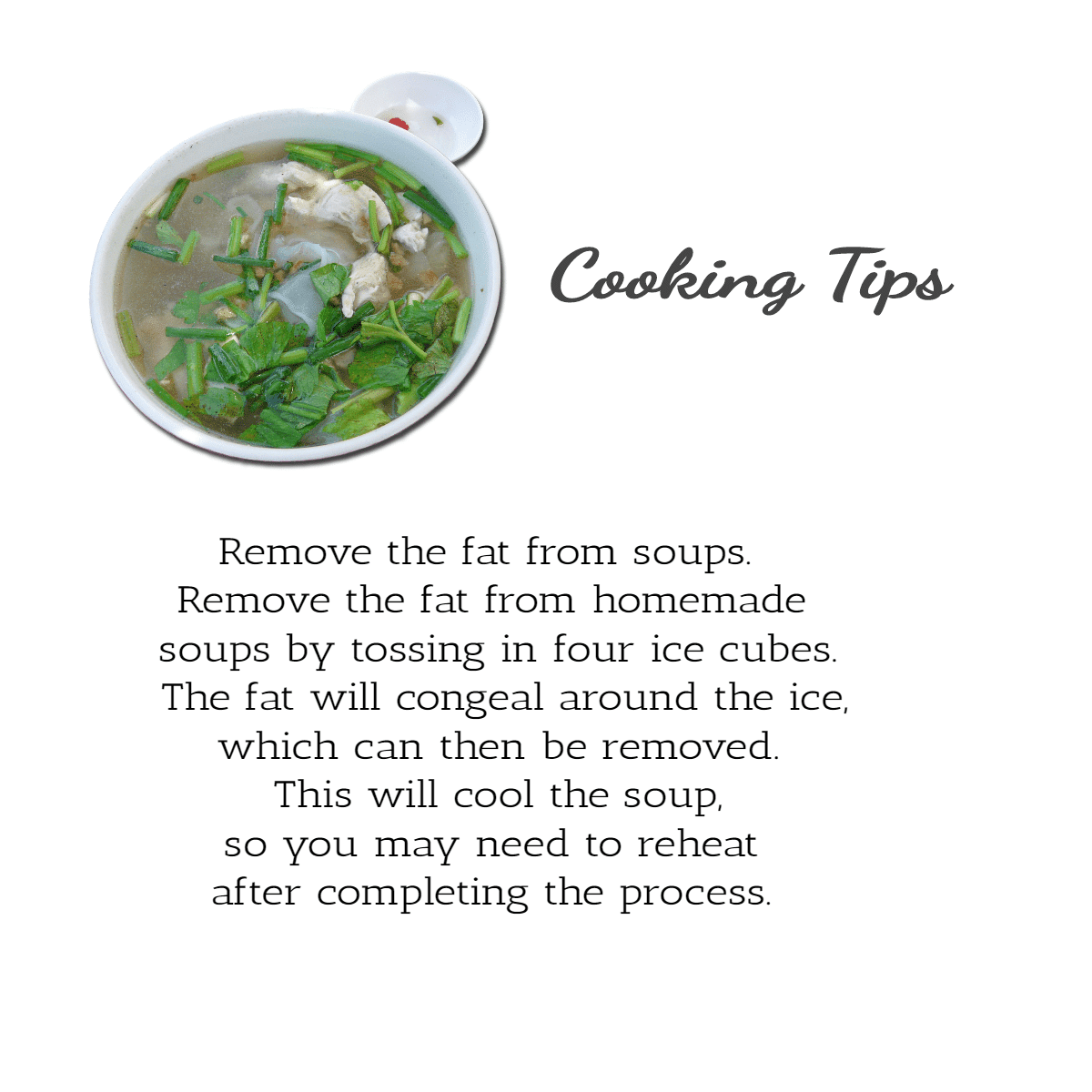 One thing to make sure of when you first receive your piece of cookware is to give it a good wash and then season it well. Make sure you have enough oil in the pot when you cook with it for the first time to prevent the food sticking.

There are a number of different brands who now sell tagines, I would recommend a Le Creuset Tagine or one made by Le Souk or Emile Henry.

I hope you have enjoyed this introduction to cooking with a tagine, it’s a great method of slow cooking and the dishes you make can be both delicious and healthy using this method of cooking. It’s also really versatile and you can cook up great food in your tagine indoors and out. I like it because it really cuts down on having to wash loads of pots and pans, everything can be added to the pot. I can serve up a  delicious spicy stew with big hunks of home-baked bread…delicious!

Remove the fat from soups. Remove the fat from homemade soups by tossing in four ice cubes.  The fat will congeal around the ice, which can then be removed. This will cool the soup, so you may need to reheat after completing the process.